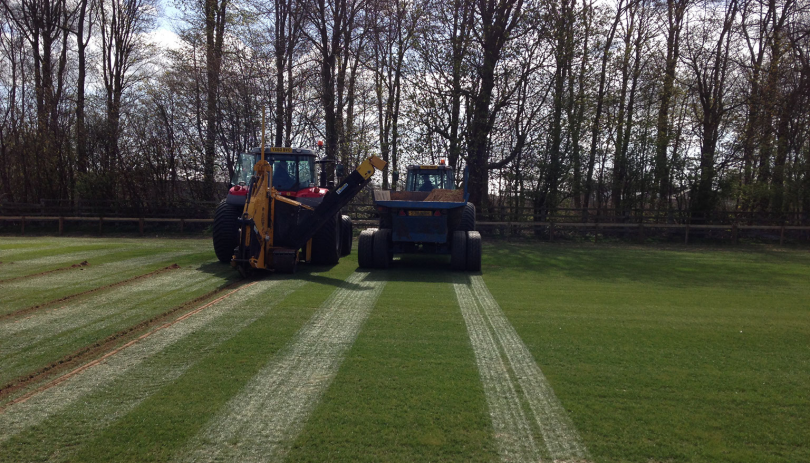 We have constructed pitches for local sports clubs including Hull RUFC, Driffield RUFC, Yapham Cricket Club, Bishop Burton College - for their use and pitches for Hull City Youth Teams. The practice pitches for Hull City Football Club. School pitches including Winifred Holtby, Archbishop Sentamu, Malet Lambert as well and numerous primary schools. Our equipment such as laser graders, trenching equipment, cultivation and seeding enables total self- sufficiency. Several customers use Landplan for maintenance and we can offer the basic package including grass cutting or a higher specification such as Verti-draining, sand dressing, fertilising, selective weed control and koro surface removal. A contract can be tailored to your budget.

Pitch drainage is carried out to enable sports areas to have a greater playing availability throughout the year. Typical drainage involves excavating a trench with a trenching machine. The arisings are elevated into a tractor and trailer. A (blue) pipe is placed at the bottom of the excavation and then gravel is placed on top of the pipe using a back-fill cart. Land drainage is usually set a 6m centres. 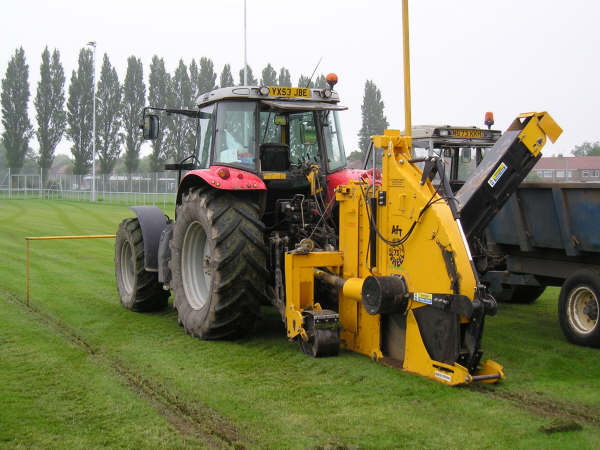 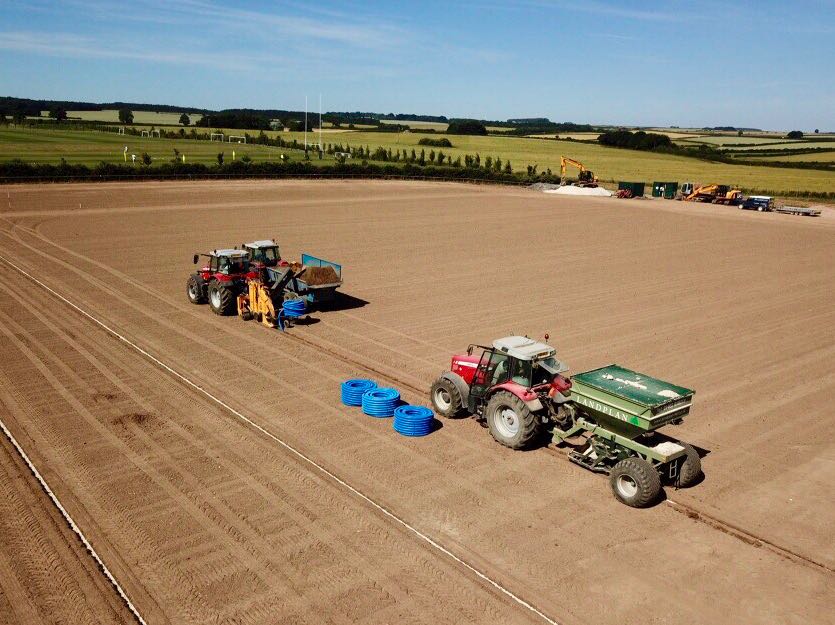 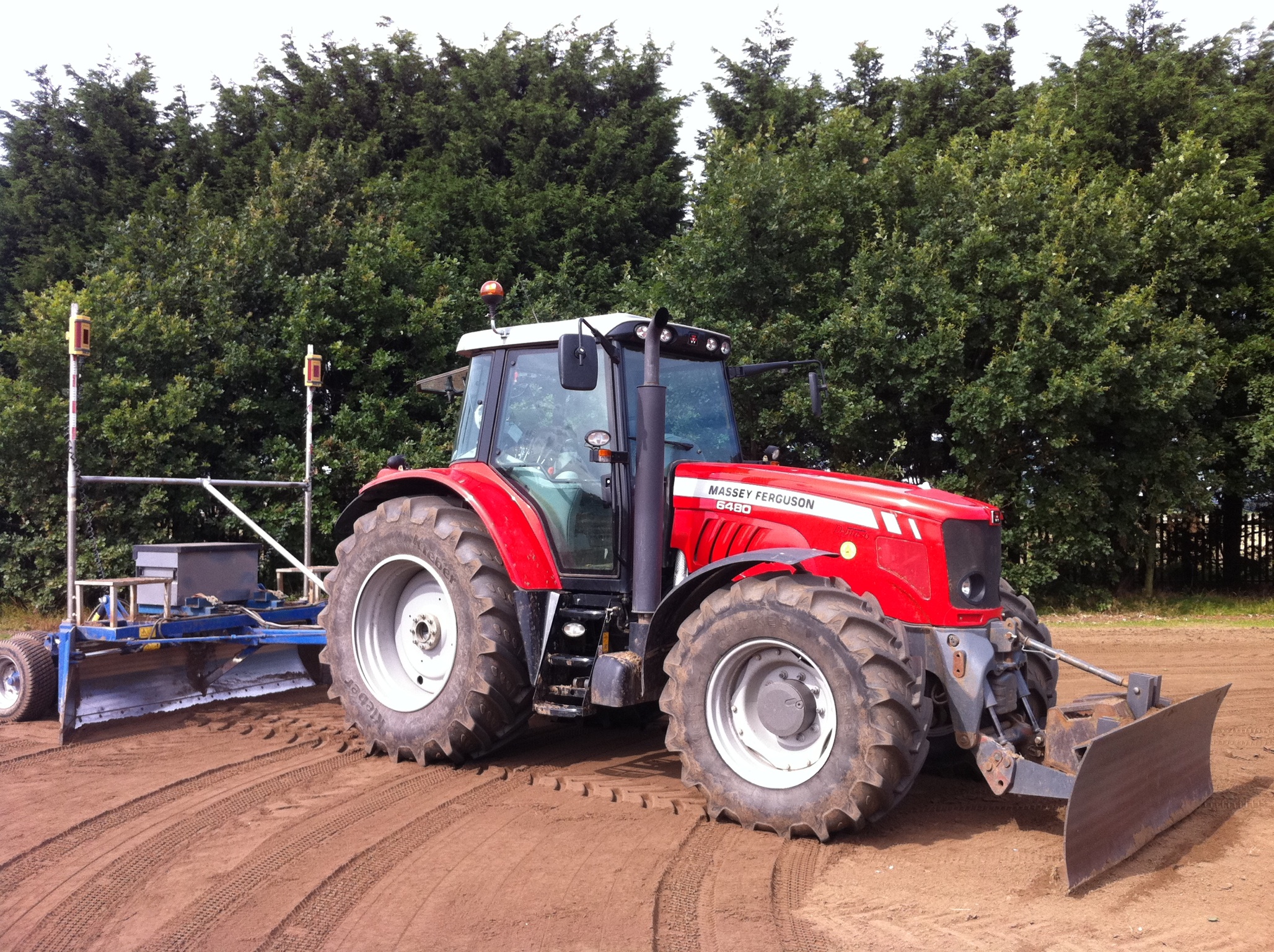 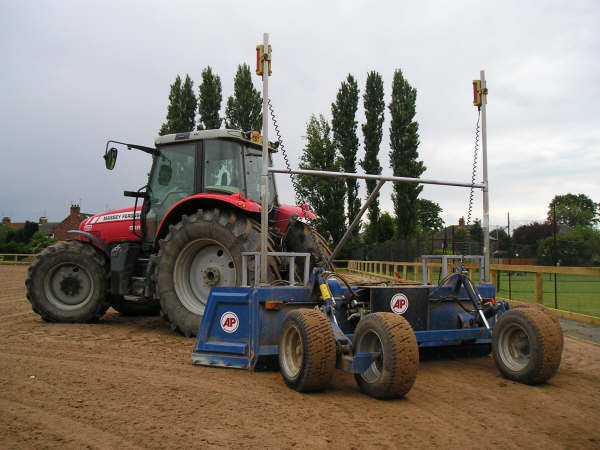 Landplan can supply and operate a professional laser controlled grading machine to construct playing fields to the specific requirements of the customer. A recent addition to Landplan’s growing fleet of specialist vehicles, the laser grading machine provides absolute accuracy, allowing the pitch or course to be constructed to a precise gradient to aid drainage. Like a traditional grader, Landplan’s specialist machine, one of only a few in the country, attaches to a tractor and is used to level the ground. However, with laser technology, Landplan are able to complete this job faster and with more accuracy than ever before. Eliminating the need for the time consuming and costly ‘setting out’ necessary when using a traditional grader, the Laser grading machine does not require a Banksman and enables ‘rework’ in a vastly smaller space of time.

Landplan provide a full maintenance program to revitalise sports fields. This includes over seeding to established playing surfaces as well as fertilising, weed control and verti-draining. 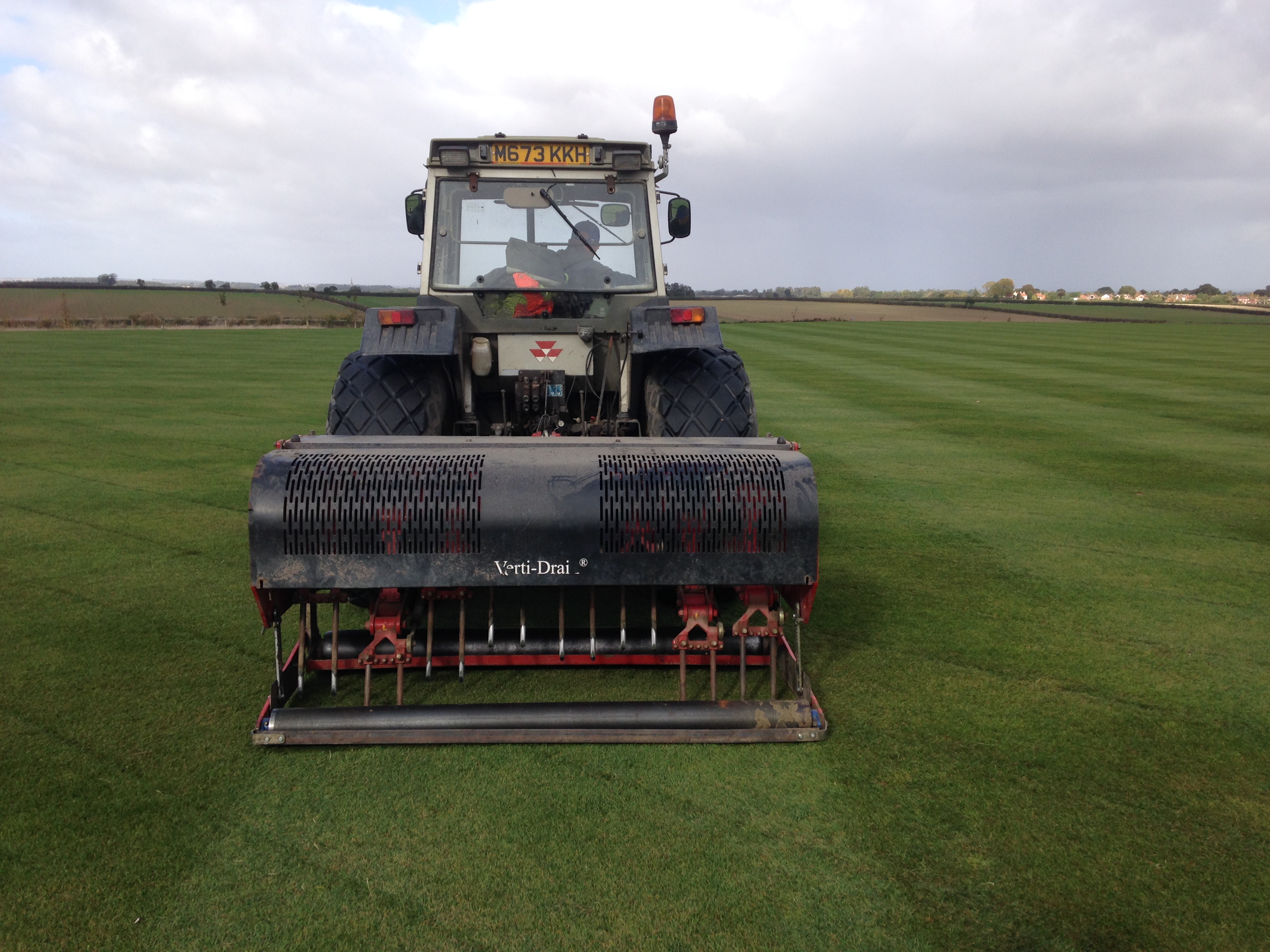 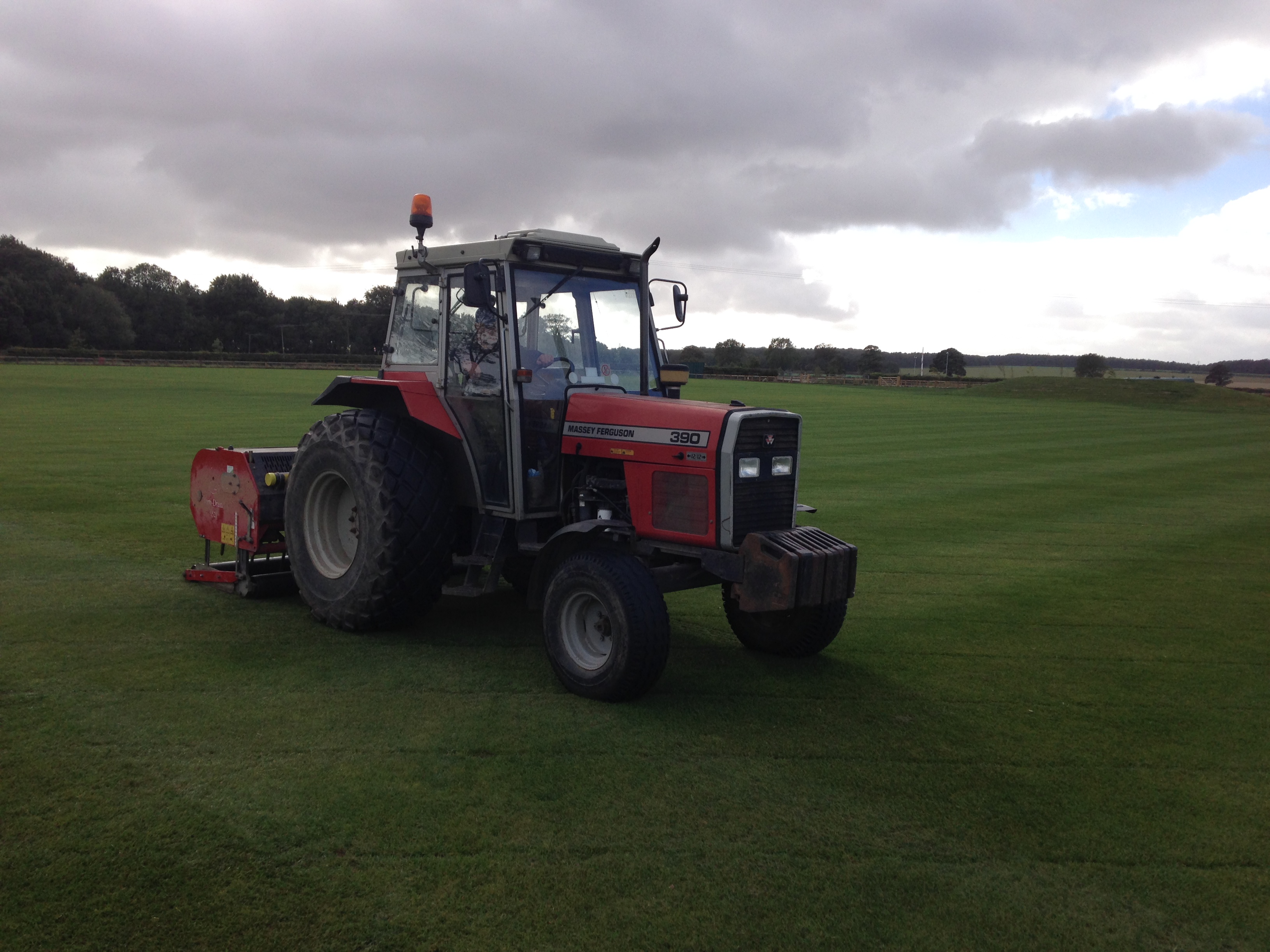 When sports pitches are used regularly, the soil becomes compacted leaving a hard surface layer which prevents water from reaching the drainage system (problems can also occur if you do not have a drainage system), resulting in a waterlogged pitch and restricted play. To combat this problem Landplan supply the Verti-Drainer; a specialist piece of equipment that attaches to a Landplan tractor, causing minimal surface disturbance and providing an immediately playable surface. The Verti-Drainer pierces the compacted surface of the sports pitch or golf course with a series of spikes that lift the turf by up to 50 mm as well as relieving compaction deeper within the soil structure. This allows deep aeration of grass root zones which increases root development and improves soil structure, strengthening the turf of the pitch or course. Verti-Draining results in increased playing time and reduced maintenance costs such as re-turfing and re-seeding as well as assisting drainage.

Sand is added to sport pitches to help Improve surface drainage which increases pitch availability. Poor drainage is a major reason for lost games and more specifically, surface compaction. Sand increases water flow in the surface and reduces compaction. Sand dressing works well with Verti-draining, as the sand can then penetrate down the Verti-drain holes. Sand dressing does not stop play and games can be played immediately after application. The machine we use uses low ground pressure tyres to reduce surface compaction. 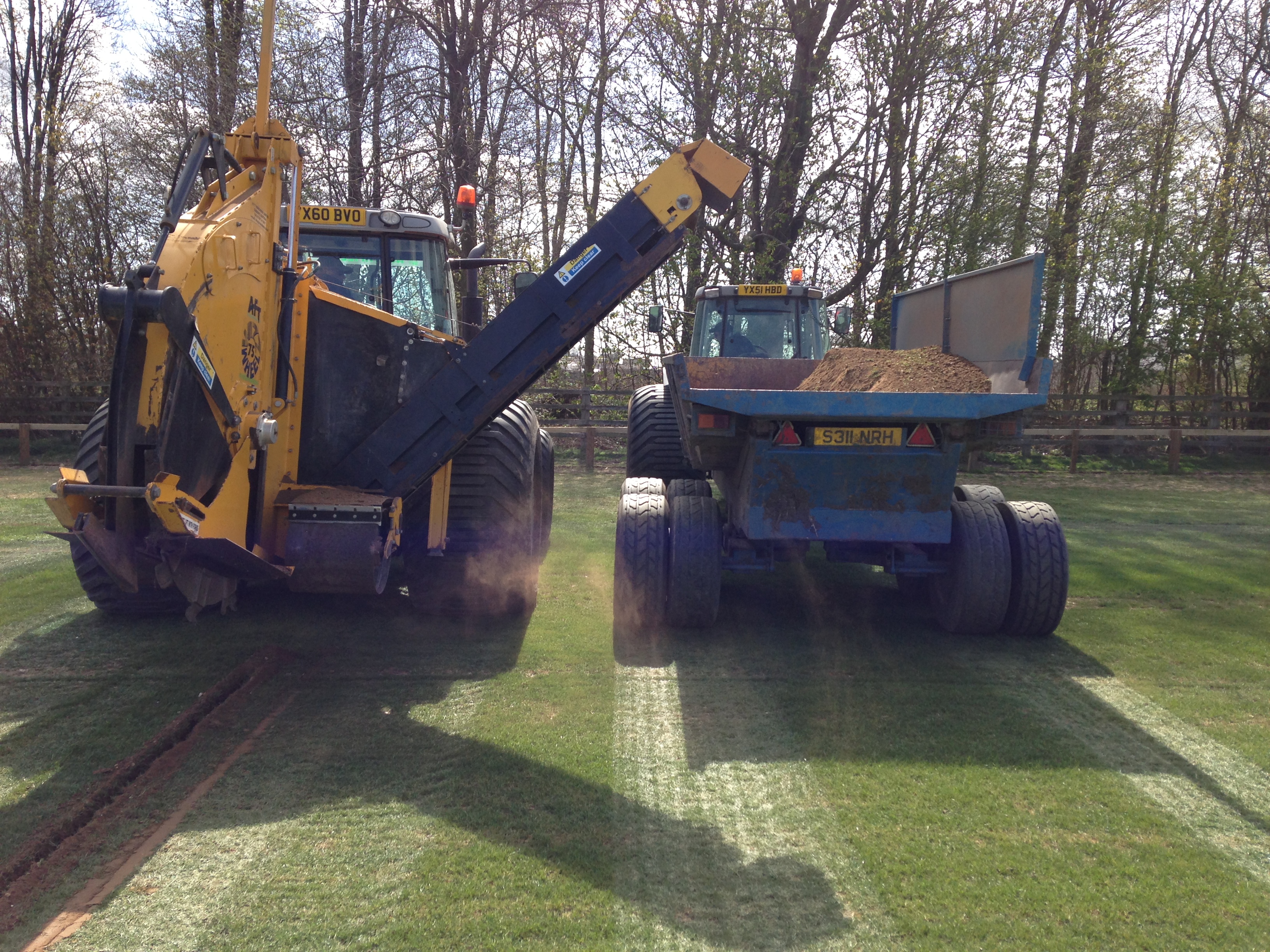 If a greater amount of pitch availability is required the area can be sand banded. These are similar to land drains but instead of 6 metre centres, sand bands are usually installed at 2 metre or even 1 metre centres. These catch and remove surface water far quicker than land drains alone. They do require the pitch to be out of play between 6 weeks and possibly up to a year depending on the width and season.

Land drainage requires a positive outlet. This can be an existing lagoon, pond, lake, dyke or a Soakaway. This Soakaway was excavated to a depth of approximately 10 metres x 3 metres wide. 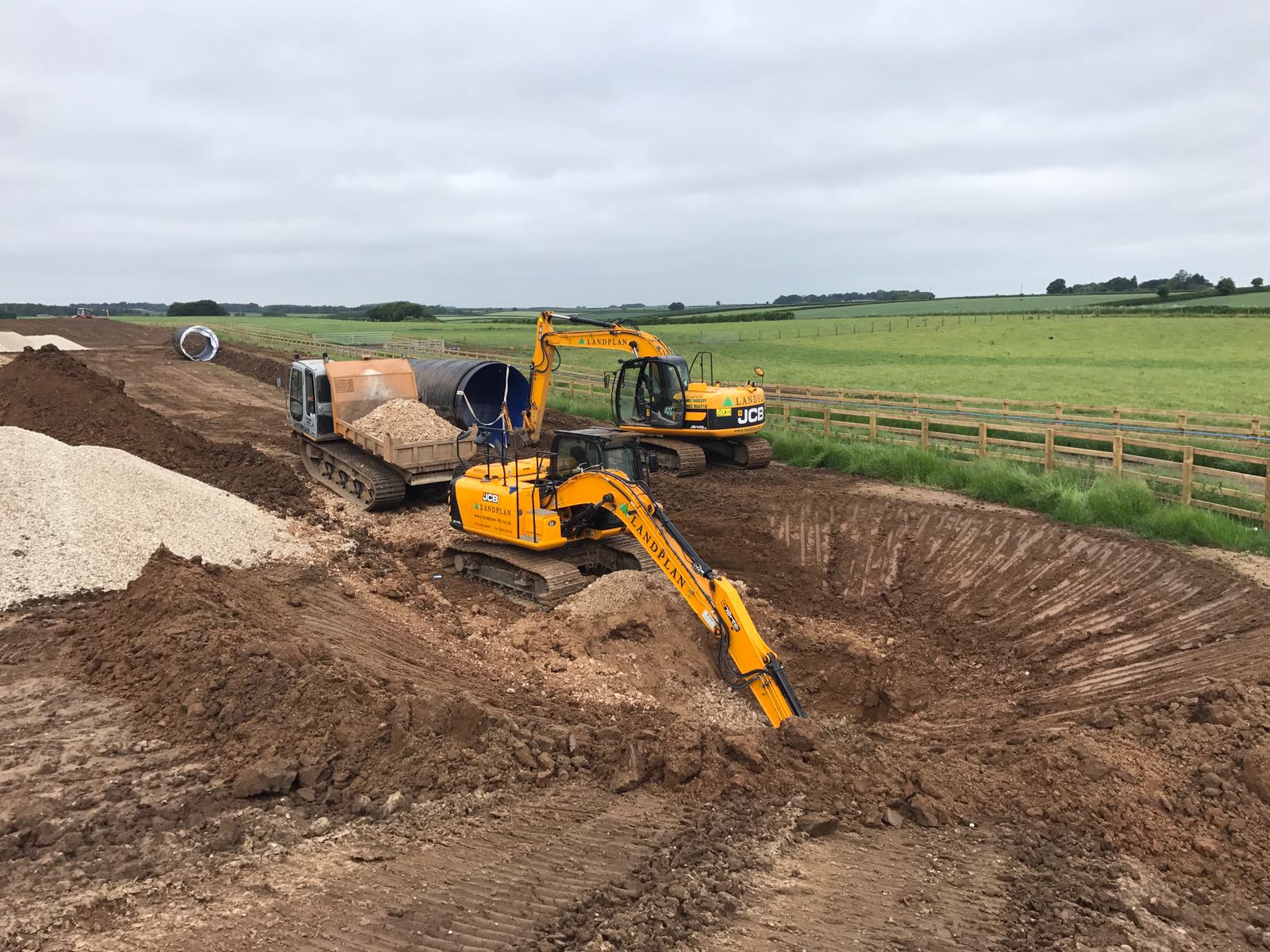 John Beal of Hull Rugby Union Football Club approached Landplan when HRUFC moved grounds to Hull YPI. The existing pitches were not up to the standard required.

The design brief – to build the best pitch in the area. Provide the maximum availability with minimum ongoing cost and re-use all on site martials on site where possible, avoiding land-fill costs.

We selected a gravel raft construction. New pitches were designed and built using many of the materials available on site. The base aggregate from the old tennis courts were used in the drainage layer. Concrete from paths and kerbs was crushed on site and used to form the new carpark. 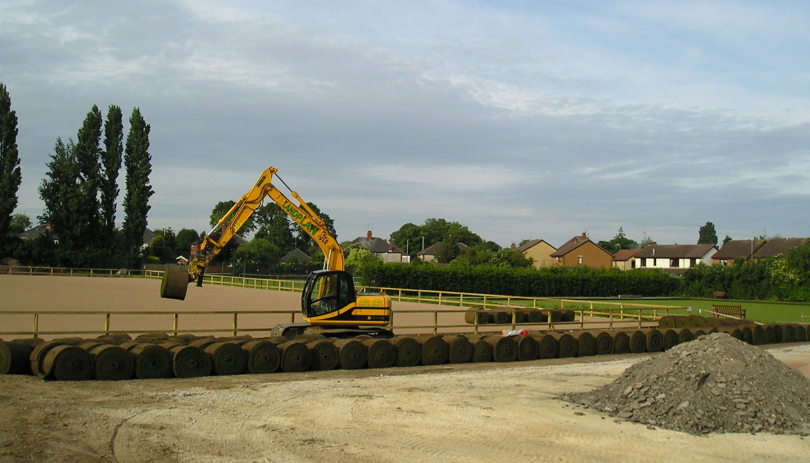 Topsoil was retained and after analysing the soil, we had to improve the structure. This was carried out by ameliorating sports sand into the finished surface. 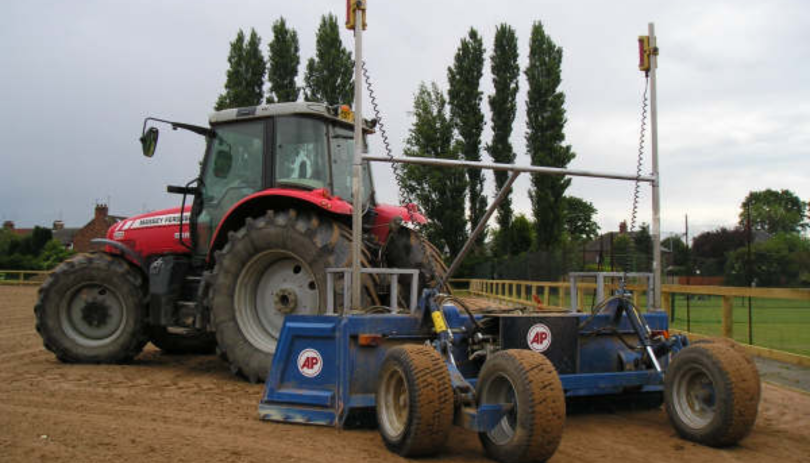 The pitch was required for use in the September and earth works were complete in July. We had 8 weeks to establish a playable grass sward.

We sourced 40mm thick turf on large rolls. This was laid, irrigated and ready for play in 6 weeks.

This design has proved to be usable almost 100% of the time. Retaining the existing soil in the construction has kept fertilising requirements to a minimum as well as needing only occasional irrigation in the driest times.

We have worked at the College for over 50 years and we were contacted on this occasion to try and resolve a water-logged pitch. During an investigation, the land drains were found to be capped which meant that any rainfall was not getting to the land drains.

We offered a solution that involved installing sand bands. The sand drains connected the surface to the existing land drains negating the land drains to take water from the surface. Pitch availability was a major concern. Hull City’s youth team needed the pitch in 6 weeks. Traditional sand banding (50 mm wide) can take up to 1 year to be playable. We redesigned our equipment to cut a 25 mm band and we invested in super wide tyres to reduce the reinstatement time and followed up with an intensive aeration, irrigation and fertiliser program.

The pitch was also too short for the standard of football being used. Space was very limited and we had a challenging difference in levels. Previously, a sloping soil bank was used and in order to gain more length we installed a retaining wall We also had to incorporate a ball stop nest as per photo. The post sockets were designed into the retaining wall steel post. A neat design that saved time, money and resources. The pitches were ready in time and to the great satisfaction of the college. 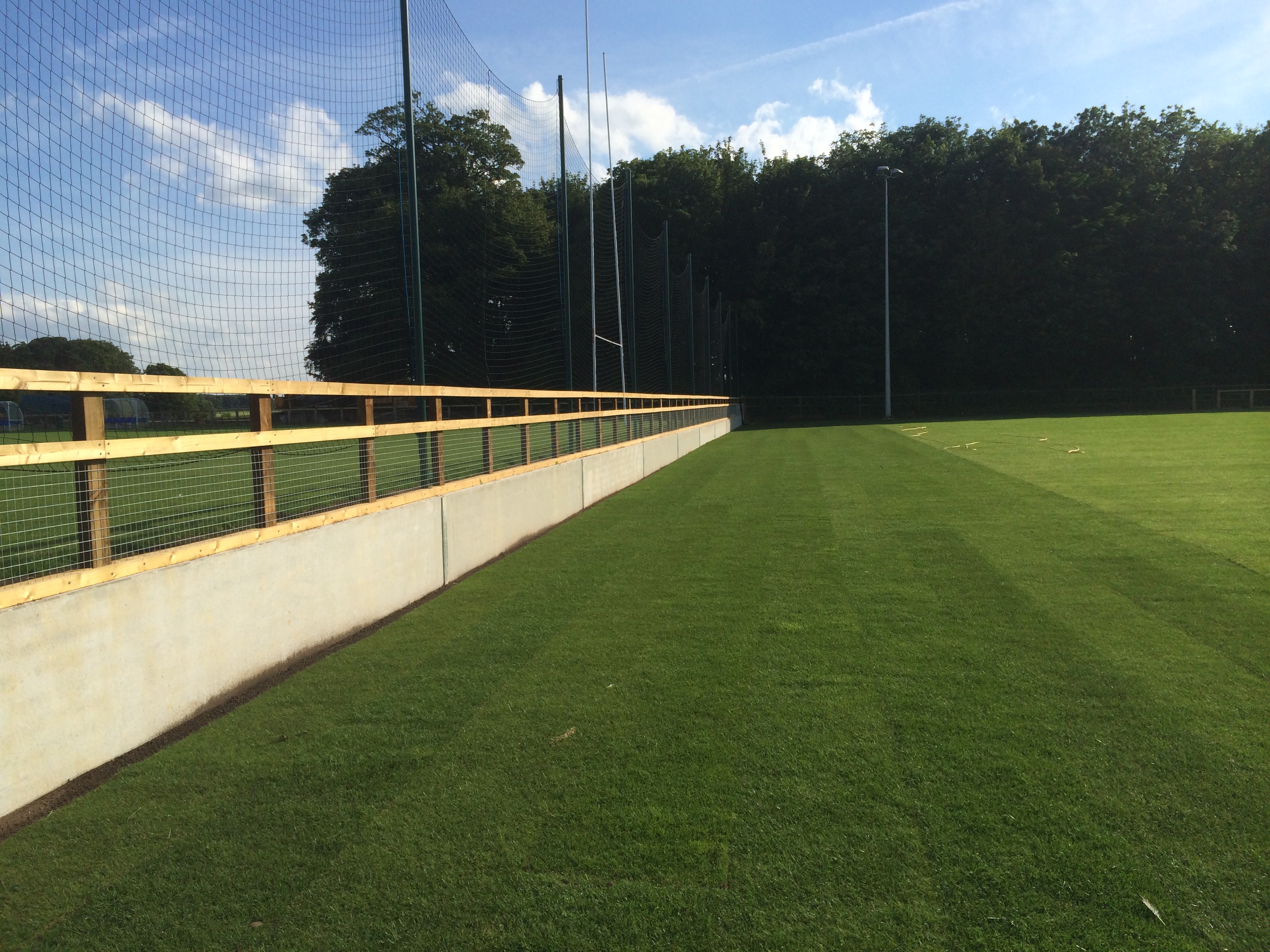 The next phase of works involved the construction of 3 and the 2 new pitches, again for Hull City youth teams. Due to the gradient of the pitches, a large cut and fill operation was required. On the 3 pitches the top soil strip was carried out using a dozer. 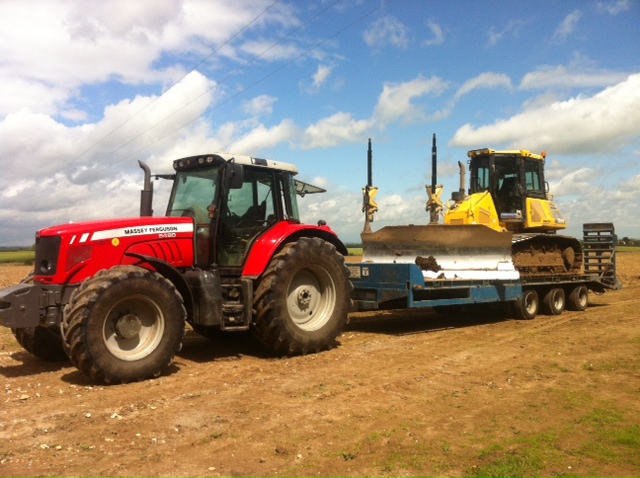 Cut and fill was also carried out using the same machine but we utilised the laser control options. Once approximate levels were achieved, we carried out laser grading using a tractor and grader. This was far more accurate than GPS and even the dozer’s grader system. With the right materials and weather, we worked to a tolerance of 5mm.

On the 2-pitch contract we would have to work through the winter months. This is not our preferred time of year for earth works but we rose to the challenge. A dozer was dismissed as these are fair weather machines, so we opted for our tracked dumpers. Soil management was critical to maintain soil structure. Each day, all areas works had to be re-sealed to avoid the soil getting saturated. 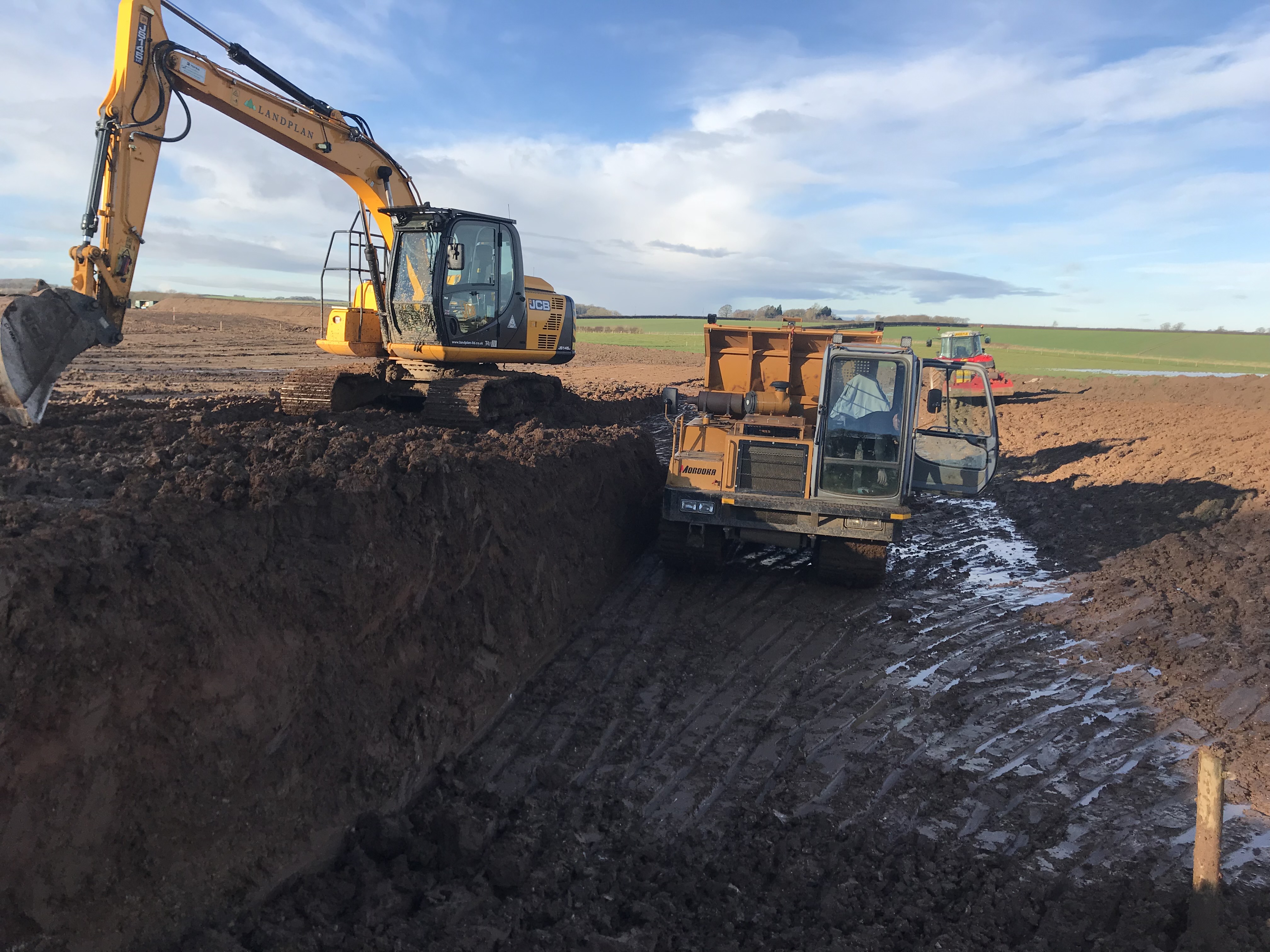 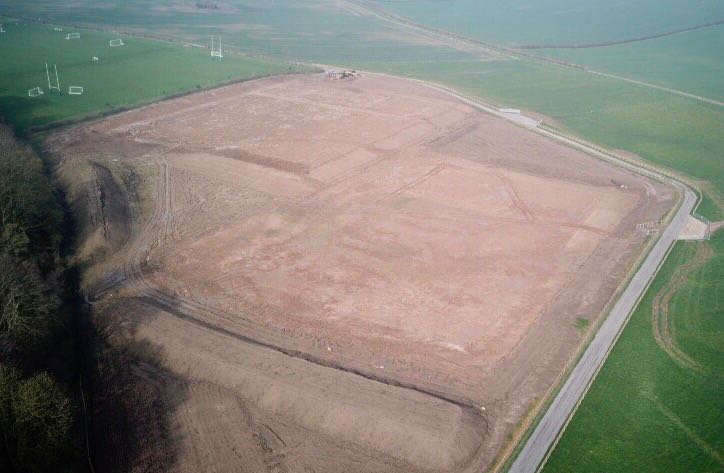 The scale of the works is visible with the Landrover centre shot. 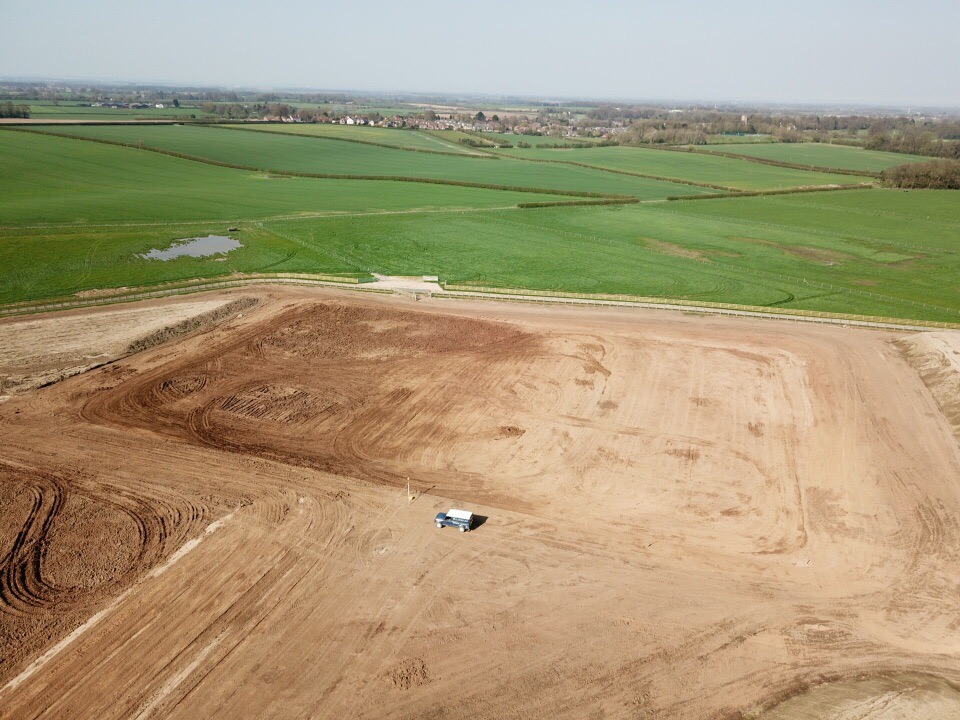 The soil was redistributed again using a tracked dumper. 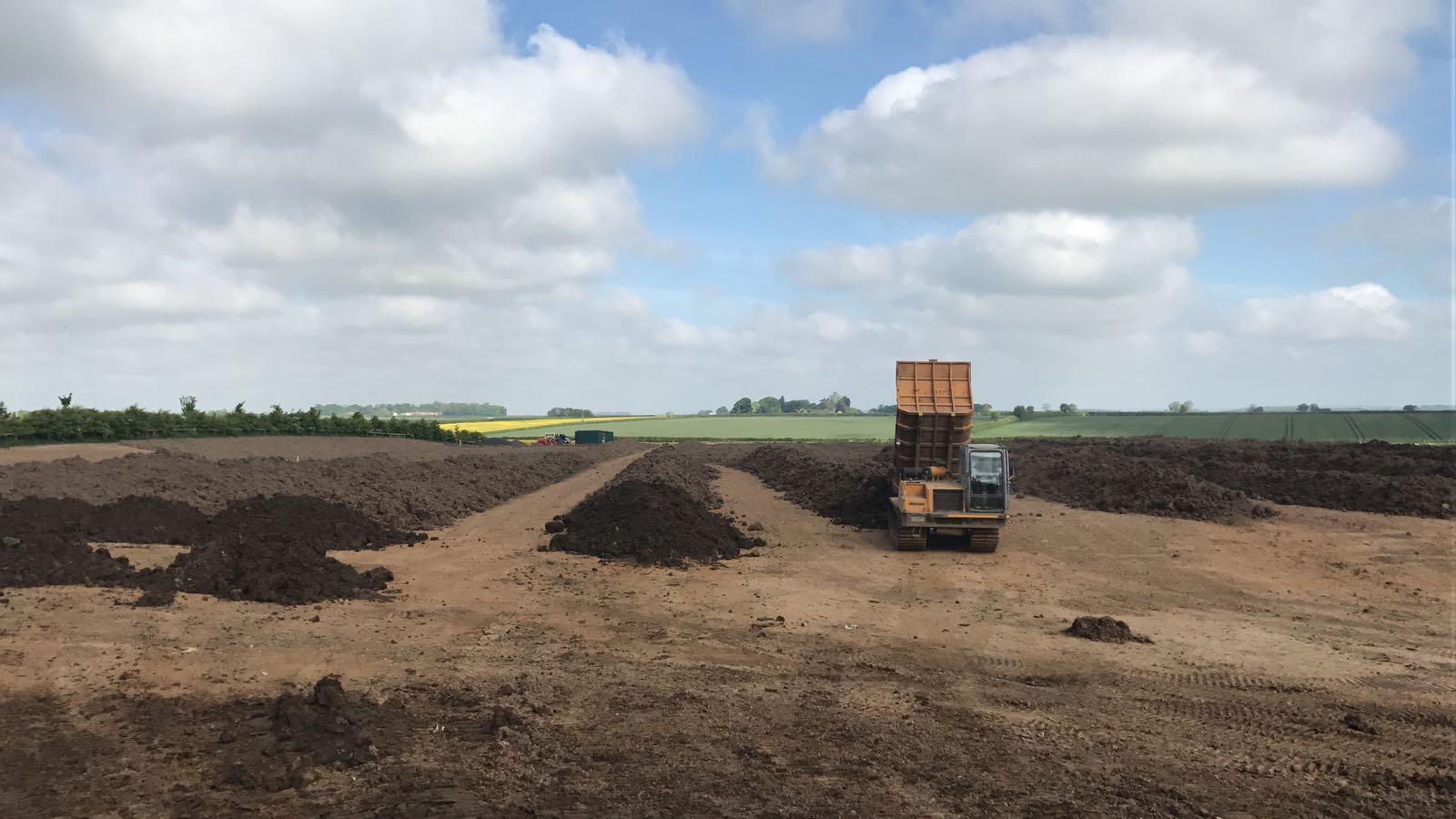 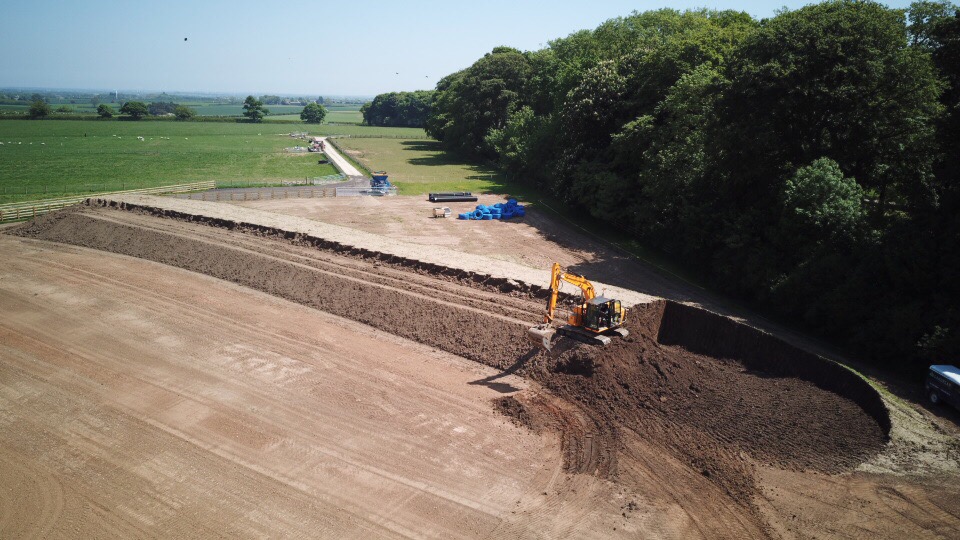 Once earth works were complete, we were looking into spring and the drains were installed. 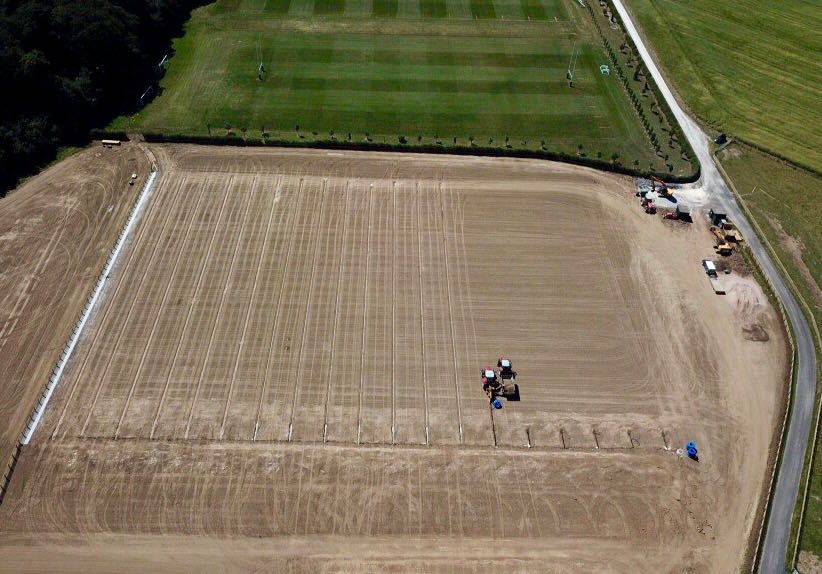 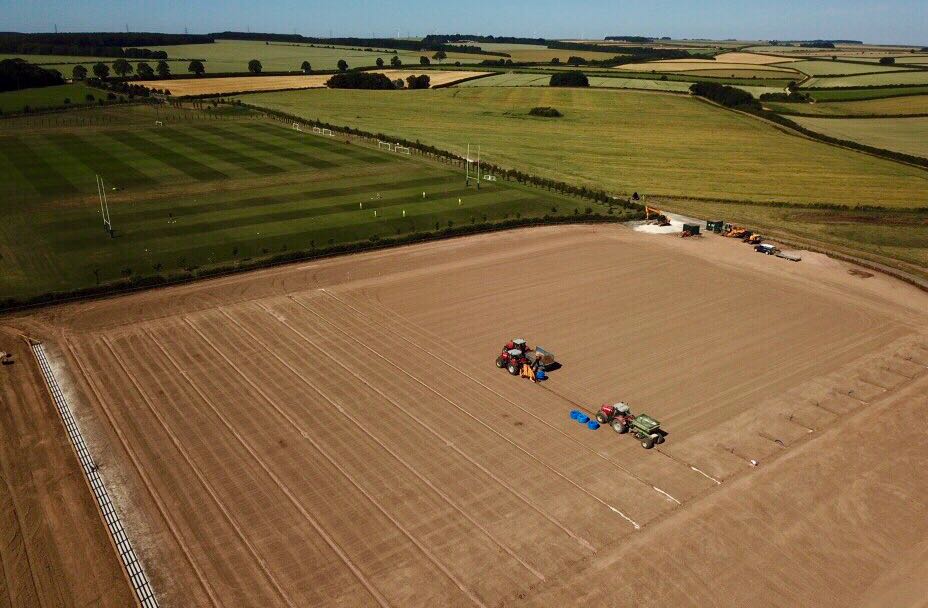 The pitches were specified with a land drainage and sand band system. On this large area were going to capture a lot of water and needed a substantial outlet. The engineers had specified a 2.4 vertical pipe sat vertical in an 8m deep hole. 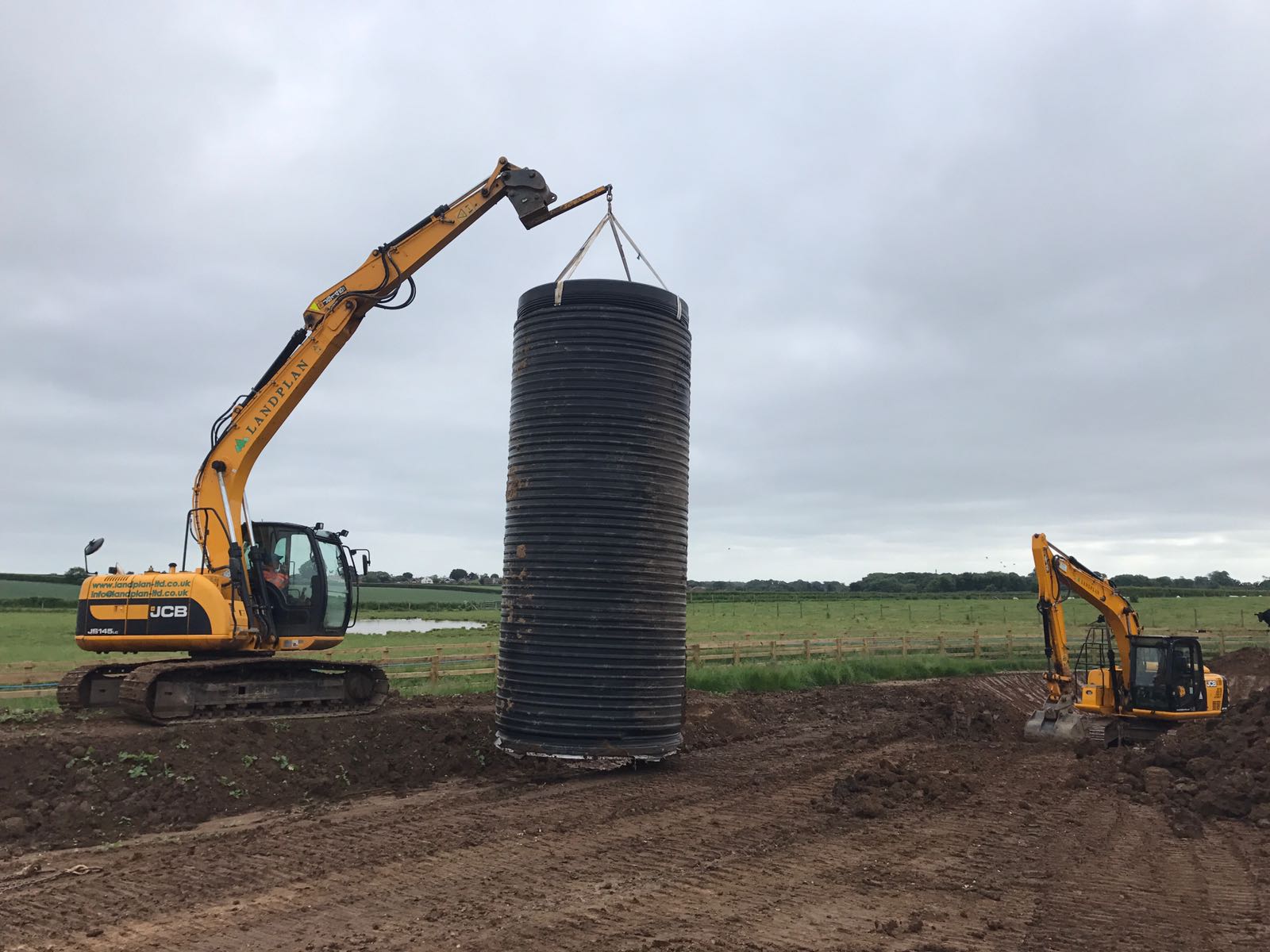 The excavation would be a challenge whilst maintaining a safe working environment and getting to the required depth. Instead of using the more traditional boxes, we opted for a gradient dig. This kept all operatives away from danger and enabled the work to be completed using out own equipment and keeping to budget.